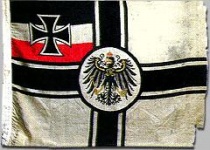 SMS Fürst Bismarck was the ceremonial first ship launched under the watershed German Navy Law of 1898. The ailing Iron Chancellor was induced to give a written endorsement for the bill and naming the first-launched ship after him was Tirpitz flattering the old man. It is doubtful Bismarck thought well of the trend to naval competition with Britain -- he had often cautioned Wilhelm not to antagonize Britain with a too-aggressive push for sea power.

Upon commissioning, Fürst Bismarck was assigned to the German East Asia Squadron. She arrived at Qingdao in August 1900, under the command of Rear Admiral Kurt von Prittwitz und Gaffron, and participated in the bloody suppression of the Boxer Rebellion. When the new armored cruiser SMS Scharnhorst arrived at Qingdao in 1909 to replace Fürst Bismarck as flagship of the East Asia Squadron, she was ordered back to Germany. Upon arriving in Kiel in June 1909, she was decommissioned and entered a lengthy modernization that lasted until 1914.

At the outbreak of World War I, the ship was reactivated for coast defense duties, but was quickly withdrawn from active service. Fürst Bismarck spent the remainder of the war as a stationary accommodation and engineering training ship in Kiel. In 1919, she was used for a short time as an office ship. She was struck from the navy register on 17 June 1919, sold for scrap, and broken up the following year at Audorf-Rendsburg.